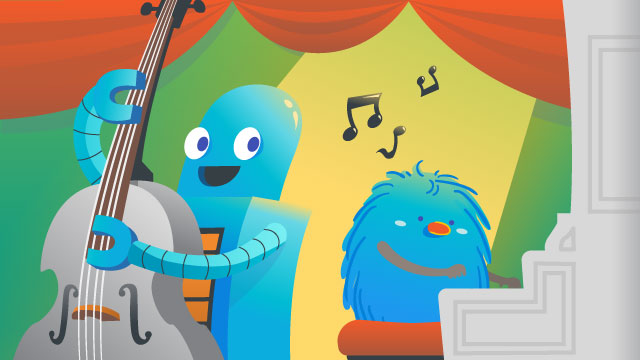 Everyone wants to create excellent explainer videos — the kind that educates and entertains thousands of people.

But these videos often devolve into cardboard cutouts instead of interesting presentations. They may explain a concept, but it’s not particularly engaging.

The first reaction is to blame the script. “Where’s the humor? Where’s the story?”

The truth is you can’t lay everything at the script writer’s feet. More often than not, the script is fine.

Certain genres work better for explainer videos than others, and choosing the wrong sound will derail your entire video. This is easier said than done, which is why so many explainer videos turn out to be uninteresting.

To make sure you pick music that enhances your message and keeps people watching, here’s a review of four music genres that work great for explainer videos.

SaaS companies love explainer videos. Since the software isn’t a tangible thing, you need to explain how it works so people understand it — and want to buy it.

SaaS explainer videos often cover complex topics, so the background music needs to keep things interesting without grabbing the spotlight away from what’s being explained.

There’s a variety of music genres that could play this role, but the tech industry has fallen in love with lofi electronic music. The bleeps and bloops of the keyboard make everything feel just space-age enough, while the patter of the drum machine keeps the tempo from dragging.

Hubspot’s video on AI epitomizes this use case:

Artificial intelligence is a heady topic, and the six-minute run time of this video shows Hubspot is serious about explaining it.

The synth keyboard bubbles along in the background as the narrator move from the history of AI to its place in modern life. The music is relaxed, which makes a supremely complex topic feel accessible without making it feel corporate or boring.

This is the blueprint that most SaaS companies use in their explainer videos, and the approach just isn’t the same without that laid back electronic music.

At first glance, jazz might seem like an odd choice for this type of video. But this eclectic genre is used all the time in advertisements, so there’s no reason it can’t work here too.

Like any kind of music, it all depends on the context.

A jazz trio might be the perfect injection of energy for a short explainer that’s most concerned with grabbing the audience’s attention. On the other hand, something on the cooler side, like a solo trumpet or discrete bassline, might work better as background support for a slower-paced video.

This is big band jazz at its loudest. When it launched, Spotify was huge news. But the news was pretty simple, so there’s not much explaining going on in the video. But when the text does appear on the screen it’s in perfect harmony with the music for maximum impact.

With this style of jazz music, the explainer video simply becomes more interesting than whatever else is happening for the audience. So they watch and learn about Spotify.

Inspiring music is more of a mood than a genre, but I’ve included it because it’s something you’ll find all the time in explainer videos.

The sound is a mix between a pop ballad, a soul tune, and an epic music score. Songs typically open with a single, distinct sound and then build to encompass a broader range of instruments and vocals. The tone is comforting, rather than overly epic.

If it sounds dramatic, that’s because it is. Inspiring music works best when it’s paired with explainer videos that start with a problem and transition to a solution.

Here’s an example from Unroll.Me:

Unroll.me helps you clean up your inbox — ostensibly by making it much easier to unsubscribe from emails. There’s no doubt this is a problem, but it’s not an extreme enough problem that people will drop what they’re doing to learn how to solve it.

Cue the inspiring music and a good script.

The video opens with a montage of people looking at their phones in frustration. This could be off-putting, but the tone of the music immediately suggests this will be a happy story, and therefore something the audience will want to watch.

As the video progresses, the exasperation fades from people’s faces. As inspiring music becomes more prominent, they start to look happier — all the while Unroll.me is explaining how their software works.

This problem/solution arc is a more dramatic take on explainer videos, but with the right music, it can be very effective. After all, people love a story with a satisfying resolution.

Over the last decade, indie rock and pop music have become more than just acquaintances. The lines have blurred between the two genres, and they’ve grown into something like collaborators.

Like water down a mountain, this trend has found its way to explainer videos as well. Check out this Pinterest video from the early days of the platform:

At 90 seconds, this animated video isn’t too long, so the music needs to keep pace. That makes it too fast for lo-fi electronica or inspiring music. (Plus the subject matter just isn’t that dramatic.)

The guitar and handclap combo keep the tempo at a nice medium as the animation breezes through the history of scrapbooking and ties it to the idea behind Pinterest.

Indie pop is a broad genre, but the guitar-heavy variation typically works best for explainers videos, because it makes everything a little less corporate and a little more inviting, like a professor teaching class outside on the lawn.

The difference is subtle but powerful. In a world full of corporate explainer videos without any soul, a little dose of an acoustic guitar can go a long way.

You could say the same thing about all of the genres we’ve covered in this article. Even well-written explainer videos could be viewed as boring without the right music.

The genres covered in this article aren’t a reflection of my personal tastes; they’re examples of music that’s effective at helping marketers convey messages. If you’re making an explainer video and you’re worried about your soundtrack, try one of those four categories on for size.

Zach Watson is the content specialist at Soundstripe, a supplier of royalty free intro music and SFX for creators. Zach’s writing has been published on InVision, CXL, Hubspot, and other reputable publications.

We can help you create your explainer video from scratch, including choosing the best-fit background music! Click on the banner below to see our package and claim your FREE consultation.