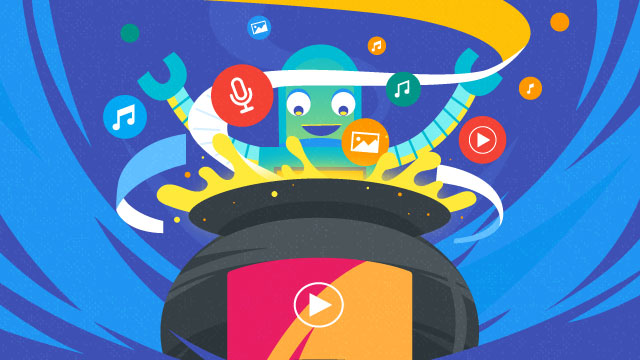 Can you recall the terrifying T-Rex attack iconic scene in Jurassic Park? How about the scary Tripods sound in War Of the Worlds? Maybe the whole scene in A Quiet Place? Or the legendary Godzilla roars in the Godzilla movies?

Those scenes certainly got your adrenaline pumping, no matter how many times you watch them.

It’s not only because of the convincing act, stunning CGI, or seamless camera-work and editing. But also the powerful sound effects that make these scenes a hundred times even more realistic.

Let’s get in more in-depth now.

Sound effects are essential in video production— yet it is a necessary element of a movie that sometimes overlooked. It’s just as important as video quality you’re producing. It emphasizes or expresses a particular emotion, humor, or realism and connect to what you’re seeing.

Now, we are going to dig about what are those sound effects that attract the audience’s attention, and why they’re necessary for your video production.

One of the most common sound effects in video production is isolated noises. It includes the sounds of everyday noises around us:

If you want to present a clear and well-defined world in your video production, you’d better take every element at your disposal. And these types of sounds are pretty basic yet impactful.

This type of sound effects brings more realism to your video production, reinforcing the visual metaphor of nature, day to day basis, and even lumbering animal.

To get more insight, listen to sound effects examples from the iconic scene on Home Alone:

The well-enhanced sound effects on this scene did a marvelous job of punctuating the construction of the physical gags. The playful sound background provides the scene with sufficient silly characters to immerse you more in excitement, but not too much that they are distracting.

Specialty effects are artificially created sound for imagined objects and places. These types of sound effects usually used in cartoons, fantasy, science-fiction movies. Although some sounds may be wrong in the literal sense, it can spark our imagination in ways “organic” sounds can’t.

It includes extraordinary sounds like man-eating monsters, space transporter, magical transformation, a shining gold genie lamp, aliens, meteor rain, space hurricane, lasers and anything else that you can imagine.

All these sounds are technically specialized by sound editors or audio professional to help the “imaginary” scenes still feel very real, organic, and natural.

Check out this quintessential scene from The Avengers Infinity War:

Although it is not realistic, the fight highlights the ambient space sound, brings up the suspense and tension. Marvel successfully made the scene way more breathtaking by favoring emotionally suggestive sounds over a literal one.

One of the most exciting parts of video production is the audio or sound replacement. Unlike the special effects where the sound is digitally created, foley recreates the sound with organic elements and synchronize it with the visual.

Examples of foley sounds are the rattle of a coffee cup on a table, breaking bones, water splash, horses hooves, the rustle of clothes, punch in the face, and many other sounds. It’s named after Jack Foley, the pioneer in the sound replacement industry.

Foley is most used in horror movies just because it typically concentrates more on capturing the dialogue and scene. That’s where the foley artist fills the gap to complete the process by recreating all of the ambient sounds needed in the movies.

After the foley sounds are recorded, the foley artists manipulate it in the next phase, the editing process, to synchronize it the scenes.

Check out this sound effect examples from fascinating process by foley artists to make sound effects for A Quiet Place:

Interesting, isn’t it? Look how they seamlessly replace the monster walking sound with the crab legs. Also, the terrifying ear opening of the monster is none other than crunchy celery. And basically, all the creepy noises you’ve heard during this movie was actually … food.

Background ambient is combined sounds that represent specific places. It brings up the environment or surrounding vibe to the audience to set the mood. It also prevents the silences in the video when no other sound is present.

Common examples of this type are sounds in a train station, restaurant, jungle, space, market, harbor, office, church, and many other background noises created in a real-life situation.

Look how the train station ambient noise adds to the dept of the ending scene of Harry Potter and the Deathly Hallows Part 2:

From that examples of sound effects we know that the sounds combination of chattering, steam train revving engine, and rolling suitcases brings up the train station soundscapes more lively. Well-added ambient noises allow us to connect with the environment as if you’re in the platform 9¾ too.

It’s the music that makes movies much better and memorable. The music can perfectly capture the movies’ scope and the gamut of emotions. It can make you tranquil, heighten the drama, and feel all the excitement— in equal measure.

In some cases, the soundtracks even more popular than the movie. So, it’s not a question anymore if the soundtrack is an integral part of a film since it gives the movie a personality.

Take a look at how music cues you to your emotional reaction in this iconic scene from Forrest Gump:

Many of this scene’s pieces, like “run Forrest, run!” are instantly recognizable. The beautifully added background music makes you warmed with joy and inspiration. It also hit you with high poignant power when the time comes for the tears. No wonder that Alan Silvestry, the composer, got nominated for the Academy Award for his genius work on Forrest Gump.

Why Are They Necessary?

Sound effects aren’t added to a video production without a plan. It has undeniable suggestive power for your emotion; the violin brings on melancholic mood and isolation, the flute associates with happiness and upbeat emotions, while the waterphone signifies scary and spooky sensation.

If it’s done correctly, sound effects can elevate your mediocre video project to the next thematic level, dramatically. That’s why you shouldn’t take the audio element of your video for granted.

Here are some more details reasons why are sound effects necessary:

They Bring Your Video to Life

Sound breathes the visual world into life. It brings unfamiliar settings as if it happens in real life, such as space or any other futuristic location.

It brings your video production to the next level and draws out that intense laughter or tears. Namely, it aims to drown audiences way deeper into the story and bring the movie’s world to life.

In a sci-fi movie or animation, sound effects bring up all the elements in a video that it almost feels more true to life. Also, there’s the fact that it may take place in an entirely fictional world.

They Can Help Emphasize a Point

One of the best parts about sounds in a video is that it can emphasize your crucial points of the video production, especially the focal message of your video.

Every movement in the movie can be— and better— stressed with sound effects. For example, gun firing, tire screeching, glass breaking, punches, and slaps in action movies.

With sound effects, you’re able to emphasize a specific portion of your video to make your audience observe the scene and characters. A quick example, if you make a short video for advertisement or another project, a quick swoosh can be particularly useful to emphasize moving text or motion graphics.

They Save Time and Money

Creating the original assets of sound effects to bring your video production to life can cost you serious time and money. As opposed to professionally recorded sound effects, libraries are more widely available and less expensive.

If you’re a noob in sound editing or just have an extremely tight budget for your video project, you can use royalty-free sound effects library, like Premium Beat, Zapsplat, SoundBible, Freesound to save your time and money.

They Can Direct Your Audience’s Emotion

Sound, in general, can control emotions. You can build anticipation, express momentum, evoke calm, and many more emotions through sound effects.

When you’re telling a story, unveiling it to the world for the first time, what the first impression you want it to be? Excitement? Sadness? Or just relaxed and peaceful? A slice of help from sound effects will make it work for you.

Different Ways to Use in Your Projects

With sound effects, you can make your video more gripping and entertaining, so that the audience easily recall it.

Here are three ways you can use sound effects in your video production.

The transition sound effects can help you to get your audience to get out of one scene and move on into another one smoothly. The common transitions include swoosh, short sting, bass impact, and many more.

The combination of sound effects, dialog, and acting skill can help you inform your audience how they should interpret the scenes they’re seeing.

A great movie is the one who can take the audience away to its world— even if it’s a real-live action or animated video.

If you want to represent a clear-cut world in your video production, you have to take every element in your video as real as possible. Using sound effects is the best approach to make your video believable.

Even simple sounds like footsteps, door closing, paper rustling, are better enhanced. Not having them in your scenes will make your video incomplete, and you’ve missed moments of impact.

Why Audio Element is Crucial?

Sound is probably the most underrated element of a great video. Still, it plays a vital role in making your video engaging. Compelling acting and well-written script alone are not enough to construct the world of video. It would help if you had a subtle manipulation of sound to fill the gap.

The audio element can seamlessly enrich your content, and add authenticity to scenes, create opportunities for your work in the limelight.

At Breadnbeyond, we offer a wide range of animated explainer video packages (including music and sound effects) that are tailored to boost your company’s sales in the next campaign. Click on the banner below!