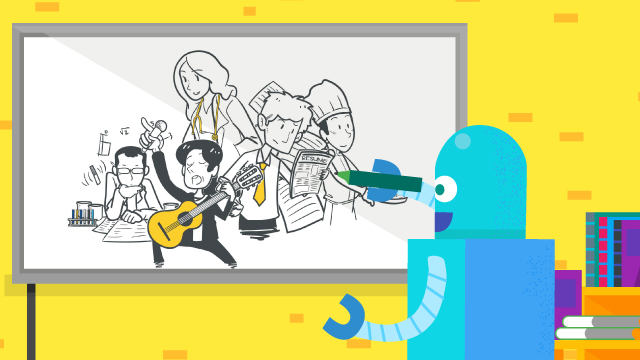 Animated explainers provide an amazing result when it comes to showing viewers’ problem and immediately offering a solution to it. They’re also a good education media due to the eye-catching visuals,  snappy animations, and narrative audio — making them an obvious center of attention that are hard to skip or miss. Add all of those up and you’ll get the perfect marketing tool to execute any business marketing strategy.

This is precisely why animated explainer videos are being used frequently today. Global companies use this short movie form to tell their stories; they can benefit various industries and cover different topics such as health, travel, tech and science, fashion, food, film etc. A user can advertise almost anything on the web by using them!

The Story of Our Animation Styles

As the industry grows, video production companies started popping up everywhere, which causes a fierce marketing and creativity competition. The rise of animated marketing videos in various industries is also causing demand for explainer animation as a tool to increase brand awareness go up.

Each company tries their best to come up with video styles and new animation styles to establish a signature for their creation. After all, animated explainer videos are a form of art in the era of social media and online media — which are bound to have signature looks — and a useful content to watch for a company’s target customers. That means if your company thinks about creating an explainer, there is a long list of video styles to choose from.

However, there are people who find it harder to choose between so many options. A quick search on YouTube shows that there are hundreds of animation explainer video styles which range from short ones (10-20 seconds) to longer ones (>4 minutes).

If you’re wondering how many words in a minute an explainer video has, it’s usually between 160 and 180 words per minute.

Our recurring clients are already familiar with our animated styles, and most of the times they call us knowing exactly what they want.

With years of experience in creating explainer videos, my team and I have tried out – and also seen – lots of styles from top-level studios.

Some of them we love, some are a little out of our taste. Some require god-tier techniques, some can be done by new learners.

We came to 14 different styles in total and each of them requires a different animation technique which you can explore. That’s what I want to share with you right here.

Here’s an example of one of our animated videos for business that uses the whiteboard style of animation, for DC HomeBuzz:

A classic and a traditional definition of explanatory video content. It is the simplest form of a 2d animation.

As you can see, this style is all about illustrations and is mostly done in black and white. You’ll see the hand of the illustrator’s drawing images after images on a clean white surface to explain a concept to you. Whiteboards are by far the best bang-for-the-buck video style for corporate purposes.

Whiteboard animations are known as the most effective type of explainer video animation thanks to its minimalistic design that allows viewers to concentrate on the content. They are also great for video series and you should definitely consider this approach.

Just as the name suggests, this video animation style conveys an explanation through simple animated graphics. Since there’s always constant movement, this style is designed to be engaging and easy to follow.

A motion graphics animated video explainer is incredibly fluid in various ways — you almost can’t go wrong with it, whatever the case may be. That is why motion graphics explainers are always in high demand (at least for us).

Do you want to engage the audience? Make an interactive video — it has the dynamics. If you want to pitch your brilliant ideas to investors or create a character for your brand, motion graphic looks awesome and can get them in awe. In our company culture, we think that motion graphics are designed to be both entertainment, communication, and marketing content.

Although a sharp set of skill and a lot of special training is required to draw and animate one of these videos. Every movement in motion graphic videos needs a tremendous amount of attention to detail and method to execute, especially the transition between frames and movement of small objects. That’s why most of the times motion graphics take a bigger chunk of animators time (and therefore your budget) compared to other styles.

This video is an example:

The idea of this style is to deliver a message through words. This type of video is quite common on the Internet, try searching ‘kinetic typography’ on Google and you’ll see what I mean.

Obviously, as the name suggests, this type of explainer video relies heavily on text and number. Coupled with relevant animation and accompanied by background music that matches the overall feel you’re going for in an ad. Kinetic typography has the power to inspire someone’s mind, express an idea and way of thinking, as well as move people’s feelings.

It’s really simple in terms of look and movement, which can be either its main strength or weakness. Essentially, Cut Out animation features characters and objects that are cut out of paper, hence the name. It’s that simple.

However, since it’s not demanding on the eyes, no fancy animation and whatnot, the audience can really concentrate on listening to and grabbing the message.

That is will work for me when I view it. On the other hand, however, the video might also come across as somewhat plain or downright boring for those who are attracted to color and movement.

A more elaborate version of the cutout style, this one is richer in the features that simpler cutout style is lacking. See it for yourself:

Who says cartoons are only for kids?

With this style, you can go for a more fun, adventurous concept works. Lots of colors, humorous bits complete with sound effects, expressive characters, and detailed environmental elements. Some videos even add an extraordinarily composed music to empower the story, make it more engaging, while others avoid background music to put more emphasis on the narration.

Next up is silhouette animation. This style works in a way that shows a character in the animated explainer video, but only in form of a silhouette. If you’re afraid a silhouette character may come off as a little cold or scary, don’t be! You can still play up the expressions, or even use your company’s color instead of the usual basic color; just as we did in this video:

Pretty much the same as the usual music video we see on MTV, this style has an animated character instead of a real live singer. Music is liberal, and the animation that represents it should be too. Many MV creators have tried using 3d animation style, some still stick to 2d.

Music videos is at its finest when it’s mixed up with some kinetic typography for the lyrics for viewers to sing along – like this video here:

When a single style of video gets boring, mixing both live action and animation gives you the best of both worlds. You can be personal and build trust with the live action part, while also entertaining and illustrative with the animation part. Just please make sure to get a high-quality camera beforehand.

Do you know, or remember, Wallace and Gromit? If you do, that’s the perfect example of stop-motion animation.

You draw a character – manual or digital – then take photos, change an element of that image (moving the hand, for example) and then take another one. When you’re done with the drawing/taking a picture routine, stack the pictures together and you have a stop-motion style video!

Stop-motion animation is the least complex between these styles, but it involves a tedious process of taking pictures and it goes frame by frame. Not to mention that a hundred pictures can result in a video that is only a few seconds long.

Just as the name implies, everything will be drawn in stick figures. Very simple. Playful but not overwhelming. This animation style breath a life into the drawing of your 5-year old daughter, and that is a simplicity at its finest. There are many popular animated stick figure animations around the world of explainers, including many created by Epipheo Studio.

Here’s a video example of this style:

Basically, this is a motion graphic video that aims to explain, educate or inform based on a script. Infographic videos rely heavily on upon, well, information. Animation like this is packed with a lot of facts, data, numbers, charts, and other kinds of statistics. Having all this data animated is very helpful in avoiding putting the viewer to sleep while reading through the data.

This is the best style to use in explaining products, a website or an app – as long as you don’t intend to have an update to the UI at a later stage. Mostly it’s an animated version of your website (or mobile app), showing the viewer how to use the desktop site or mobile app- step-by-step.

This type of video is very helpful to improve customers’ experience in using your product service, and therefore increase, or at least maintain revenue at a steady level. Most videos that intend to become a tutorial or a how-to video, would want to use animated screencaps to make it easy to understand.

…this last style is a mix of many different animation styles, from cartoon to music, and from stick figure to silhouette.

Hopefully, this article will help in your search for the best types of explainer clips for your company. If you want to see more videos that we have created, click here to see our portfolios.

We developed these styles one step by another based on the exchange of tips between our professional artists. There are many tools and resources out there to support our endeavor in developing our art style.

Before you place an order, have in mind that creating an animated video might seem simple on the surface, but it is not. It requires a computer with compatible hardware and software, and you know the price of the latest technology isn’t cheap.

That said, whichever explainer video company you hire to create your video explainer must have a reason to charge a certain price.

Check our other blog posts or subscribe to our emails to find useful resources for video marketing. If you’re intrigued to start your first explainer, we made an infographic to walk you through the explainer video production process.

Want to have your own animated video? Check out our packages and book a FREE consultation today!

Disclaimer for the featured videos: all rights reserved by Breadnbeyond and its client(s), usage of these videos are permitted with attribution.