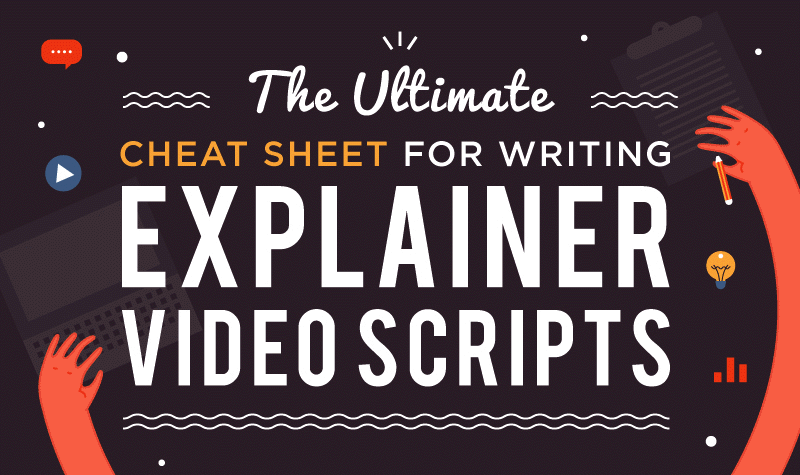 First off, let’s jump straight into what you came here for. The free explainer video checklist and infographic. Our design team has created an infographic that you can download to use later on for your own explainer video project — complete with an embed code.

We have more practical tips and useful information for the items in the infographic below, so be sure to scroll all the way down 🙂

In order to start building an explainer video script from the ground up, you need to understand the fundamentals first. Let’s introduce you to them.

The script is the barebone of an explainer video that also acts as a showcase for your expertise in the subject matter. In most cases, explainer video script consists of voiceover text for the narrator with few pointers for the visuals.

Explainer video script is a crucial component that determines the end result of the video. It is the blueprint that the designers refer to when they create and animate the characters and environments in the video. And when the foundation is strong, the building will be formidable.

Why Do I Need an Explainer Video Script?

One of the main reason why explainer videos are very popular among businesses is its flexibility in storytelling. Explainer video script is what the narrator or voice actor will say in the video – and for it to work you need to tell it like a story. It’s suggested that the scriptwriter work closely with the designers to align their vision on how the script would look like once it’s visualized.

First thing’s first, you should know that explainer video script is a creative content – you should not be bound by any rules. However, for an explainer video that speaks directly to the target audience, there are several questions that you need to ask yourself to make sure that your script is on point:

Make sure that at the beginning of the script, you address specifically who you are talking to with your explainer video. Do not shy away from directly mentioning professions/occupations because it’s very important that you get the attention of people with high buying-intent.

Hit your target audience right in the feels. Introduce the problem that you can help them solve by turning it into a relatable story that you know they generally experience from time to time. A great example of this is DropBox’s hooking story of how you always misplace small things in your life as an anatomy how you forget where you save files in your computer. Here’s the line:

“You’ve been there, you’re about to buy lunch and you realize your wallet is in your other pants. Or maybe you left your keys at home. The problem is the organization.”

If there is, that means you’ve got a competitor. As competitors, it’s on you whether you want to explicitly mention them or just hint strongly at them. The point of this part is making sure that you tell your audience what drawbacks or inconvenient they get when using your competitor’s product.

After showing people the drawbacks and inconveniences of using other solutions, it’s time to bring up what you’re offering better. This comes down to the quality of your product before anything else. For example, if your competitor offers a 3-month money-back warranty, is your product good enough to offer a 6-month warranty? Or are you willing to charge less for a similar quality product?

A trial period is always good to have in any product, especially when it comes to digital products. Provide at least 7 days trial period for users to give your products a spin and decide for themselves if they can use it. This may result in fewer buyers in a short time period, but it will give you a long-term user.

The tagline is not the most important thing when it comes to branding, but it helps to associate your brand with certain phrases. There are many products that have been associated with a single phrase just because they use it in every promotional content they have. So, spare some time to brainstorm your version of Arnold Schwarzenegger’s “I’ll be back” from Terminator.

An explainer video script is a narrative read by a voice actor for an animated video. A professional script is a quality explainer’s cornerstone.

Writing a script for your video is a tricky matter. A good video must have a uniquely written script to support it instead of a template. The purpose of handwriting a script is that each company has a different target market with their own unique preferences. Diction, phrasing, and references in a script which reflect the company’s character are vital elements of a quality explainer video.

A voiceover is complementary to the visual aspects of an explainer video. They work in harmony: the voiceover explains what might be overlooked in the visual, and the visual shows what the voiceover can’t quite deliver with words alone.

That said, writing an animated video script template is a handful–but you can do it yourself, assuming you have the time.

Based on what I’ve learned from experts in the field,  I’ve decided to write a blog post about their best tips, or guidelines, for writing an explainer video script template and I’m going to share them with you.

Here are the key insiders’ tips for writing an excellent script:

Our new clients who come to us prepared with a script often use complicated words that even our writers have to look up first. In order for an explainer video script to convey the intended message, you need to use simple words that can be easily translated into visual action to avoid problems in the illustration process.

Simple changes in the words you choose can help the graphic design team to create a much more accurate illustration of the subject.

Keep in mind that explainers are short. Writing a script that can be represented visually means conveying a lot of information about a product within a short time frame, usually about 60 seconds or so.

When we started creating explainer clips, all we cared about was smooth animation and pretty illustrations. We now have learned that a poorly visualized script can be fatal for an animated clip. Correctly executed, animated explainer videos can be a great digital marketing tool because they have both visual and auditory information to help viewers learn.

People tend to watch a video for one of two purposes: to gather information or to be entertained. You have to understand that there are enough ads and salesmen in the world.

Bettina Hein, the co-author of Video Marketing for Dummies, says that the most successful marketing videos are able to include both humor and information, which is why humor in video marketing is such an important and popular tool.

Explainer videos are marketing tools, and sometimes it’s hard to get people’s attention when a video is exclusively about you trying to sell a product.

Dollar Shave Club’s video has enough humor to make its audience (or at least me) laugh loud enough to be heard by the whole office. I find this kind of video really entertaining and refreshing coming from a commercial company. Within a video less than three minutes, it was easy to bring thousands of customers in their early days.

I don’t mean to say that humor is the only way to write a video script, but it’s definitely a viable solution to overcome the promotional video stigma, and it works.

In a nutshell, if you put your sense of humor into your script, your audience will feel amused throughout the video.

Write your script in a way that can be easily read by the voice actor. That means including the pace and tone as well as the words, events or phrases that you want to highlight — also, don’t forget about the music to sync with.

These things matter to your explainer because the tone is what brings your brand to life: It helps shape your brand’s persona in the eyes of your audience.

When you’re thinking about using an explainer video as part of your video marketing, your first thought might be about the amazing and creative visuals your viewers will see. That’s the most common mistake made in video marketing.

To address, avoid and solve this issue, you must not forget that the tone of voice is more important for branding your business than anything else. Essentially, the tone of voice should reflect the brand’s personality and values.

Don’t forget that in an explainer clip you can be more playful with words and pronunciation. Some clever puns never hurt since your viewers will be able to hear how the words are pronounced, so there will be context.

Writing is one of the most important features of a successful explainer video script template; there is no excuse to write poorly or provide content that doesn’t have any real value.

Writing like you speak, or using a ‘conversational tone’, means writing in a way that is easily understandable and free from long words.

Good writing is like a conversation between the writer and the reader: it is a dialogue. So, when you’re writing your explainer video script, imagine yourself trying to explain your products to a close friend.

If you were having an actual conversation about your business with a friend, what kind of words would you use? What tone would you speak with?

Apply those to your video script template and you’re off to an incredible start in making an awesome animated clip.

An explainer video script should only as long as it needs to be. There’s a reason you have all of those characters and objects moving around: to make you talk less. Based on our data, an average 60-second script is 160-180 words long and should provide the general idea of a product or service.

That number may vary, mainly due to:

As a matter of fact, it is possible for a voice actor to read up to 240 words per minute. Read more about animated video length in my in-depth analysis here.

Last but not least, you need to implement the classic structure of any narrative script ever. Remember, a great explainer video is one that serves as a story and promotion at the same time.

The first thing you should address before anything else in an explainer video script is what problem the viewers are experiencing. This will shape viewers’ perspective and encourage them to see themselves in the video, providing you with an opening to introduce your product or service to an audience more receptive to the answer you’re providing.

The introduction of your explainer video should be very brief. For example, if we were to introduce ourselves we’d say: “We’re Breadnbeyond and we help startups explain their products with animated videos” or something along those lines. Sharp, focused, and to the point.

Explain the reason your proposed solution to the problem is better than anyone else’s. Your message on this subject shouldn’t beat around the bush. For example, “we’re better than Acme company because we’re cheaper and just as good”.

The next part should explain how you solve the aforementioned problem better than any other company in the market right now. There should be clear steps showing your product or service is actually capable of solving the problem. This approach is effective in assuring viewers that your solution isn’t just another flop that won’t work.

By using these script writing tips, you’ll able to build a top emotional story to motivate viewers to buy your products or use your services. It is a good step towards increasing your sales.