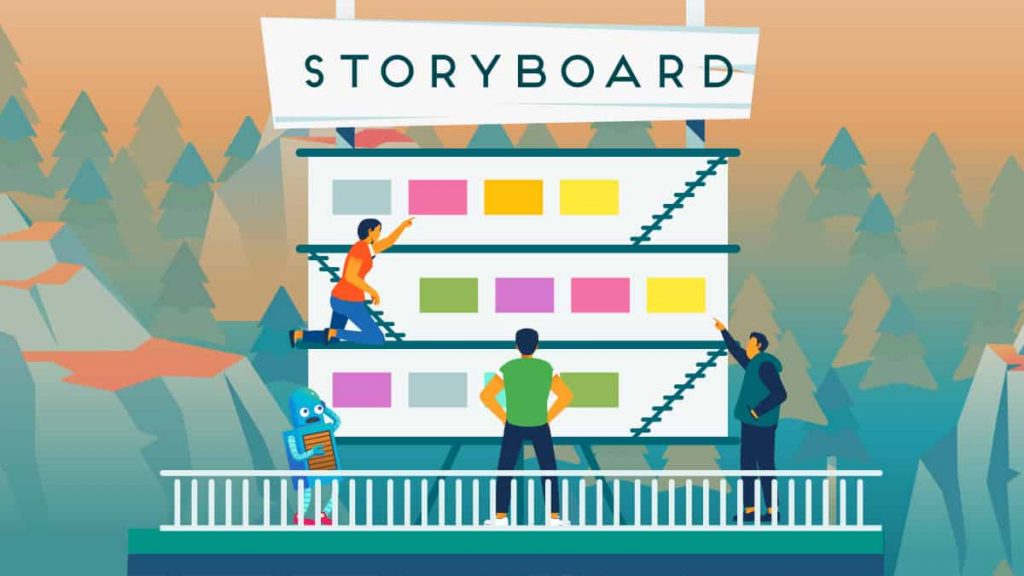 Videos are made from a series of ideas stitched together into entertaining and informative watchable pictures. Putting together pieces of clips to make a sequence that is enjoyable to watch is one thing, but coming up and organizing the idea before that is an entirely different challenge.

That’s why you need something to help you organize your thoughts into smaller bits of visual interpretation in order to help you formulate the perfect sequence of ideas for a great video: a storyboard.

What is a Storyboard Exactly?

Storyboards are organizers for your thoughts, but instead of using notes or bullet points, it uses visual sketches that could help you create a ‘draft’ for a video. The purpose of making a storyboard is to help you pre-visualize how your video will look like once it’s finished.

For video production, let’s put storyboards this way: they are the Marvel comics version of those Avengers movies you’ve watched many times.

Why Do You Need a Storyboard for Video Production?

Another question might pop into your head: why do I need to make a storyboard while I can improvise along the way?

Let me try to answer that question with several different perspectives.

It Helps you Organize Your Ideas Visually

The most fundamental benefit of drawing a storyboard for your video projects is that you get to see your ideas being visualized instead of jumping in blindly towards the production stage.

While a script could be enough to guide you along the pre-production process, having a storyboard can minimize the risk of mid-production hiccups such as character revision or re-shoots of certain scenes.

Having your ideas visualized and organized in a storyboard can also help you see the flaws in the way you share your ideas or stories with your videos. After all, storyboard IS about telling stories.

It Uniforms the Visions in Your Team

Since videos are made by a team instead of one individual, the visualization in each team member’s brain might be different.

In an ideal video production cycle, there’s always a script that guides cinematographers, illustrators, voice actors, and animators unite their visions of what the final video looks like – that’s what a storyboard does.

It Contributes to the Effectiveness of your Video

In storyboards, you’ll have several aspects of your videos that you wouldn’t have if you decide to only go with a script.

While all of those things will only be sketches and arrows as guidelines, you will be able to see several issues way before you jump into production stage. Issues like characters looking too cartoony or out of place, background objects placements that’s a little bit off, character movements that looks awkward and other things that might impact your video negatively.

There are several other reasons why storyboards is a no-brainer for anyone working in the video production industry.

It’s a Visual Note for Ideas

Another reason why you storyboards are a no-brainer for anyone working in the video creation industry. By sketching down your idea into a storyboard, you can easily re-visit and re-use that same idea for your future projects.

Traditional storyboards are a series of sketches from ink or pencil created by storyboard artists under the direction of production manager with a script as a guideline. This type of storyboard is best used to create initial draft in a creative team meeting.

The main benefit of sketching a storyboard for creative directors and storyboard artists is that they get to physically lay out scenes. Whether they have them arranged on a wall or kept together in a binder, traditional storyboard always comes in handy throughout the production process. 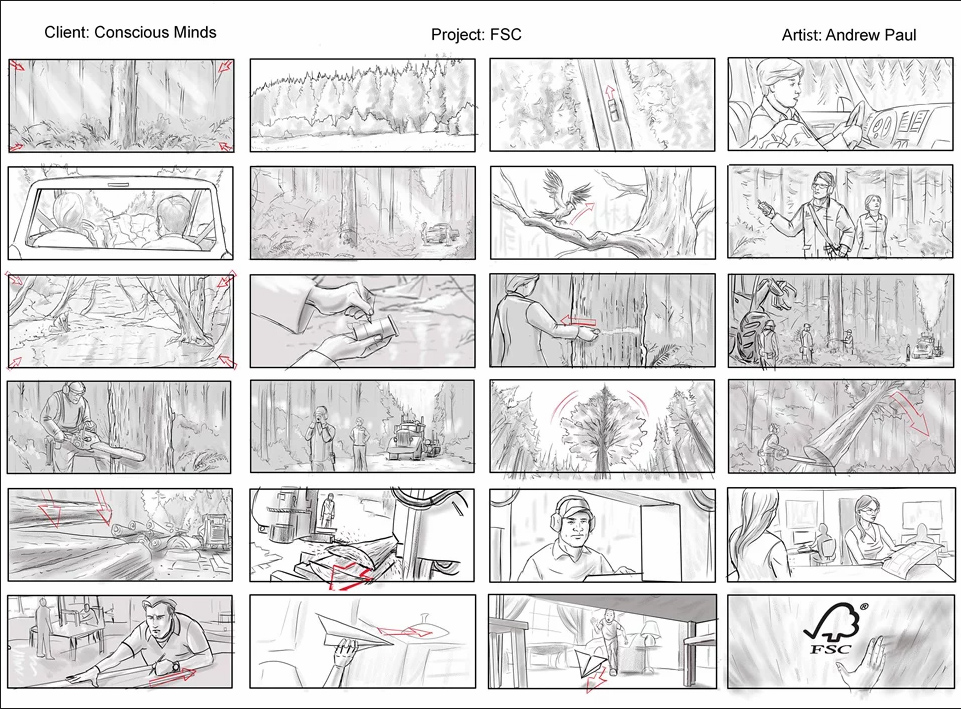 A static digital storyboard should look something like this (at least in its final stage): 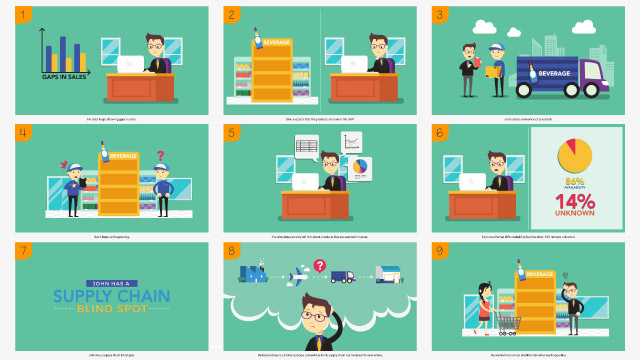 There are several sub-types of digital storyboards:

Why It’s Vital to Video Production

Storyboards are the blueprints based on which your video will be created. Not having storyboard can cause your project to spiral out of control for the lack of guidelines to follow.

There are other reasons why storyboards are a vital element to start your video production, let’s go over them.

A storyboard is a fast track to share an idea with members of your team. It’s visual, which means your team doesn’t have to rely on their individual imaginations.

What’s even better is that you can use it in a team presentation in front of everyone. You can share your ideas with members of your team and get their two cents, which can improve the overall result of your video.

Continuing from the point above, communicating an idea with a storyboard is much easier compared to back-and-forth discussion with words.

In a business scenario, let’s say like us working with overseas clients, a storyboard is essential. Without a storyboard, it’s almost impossible to unite our visions on how the characters, objects, colors, and overall video should look like.

Once you have a storyboard, going into the video production stage is much simpler. Your illustrators and animators have a guideline to do their job, and you have a tool to refer back for revisions.

There won’t be more going back and forth about how a scene should be drawn or shot, how a character should be pictured, etc. Storyboard can have the power to make your team into a well-oiled machine.

How to Make a Storyboard

The first step you need to do to create a storyboard is dividing your work space (e.g a sheet of paper or a digital canvass) into several squares. These squares will be your frames for each scene in your video.

In each square, you will draw a different scene one after another. How you do it is entirely up to you – whether you want to sketch with pencil on a piece of paper or create it digitally on a computer.

Don’t forget to leave bits of white spaces just in case you need to add pointers and text descriptions to help explain your storyboard to others who are working on the video with you.

Below each scene insert the lines from your video script as a cue for the voice actor and guideline for the animators so they can animate each scene accurately.

The best way to create a storyboard is to imagine it as a comic book. Other person who reads it (e.g co-worker and client) can get a sense of what’s happening in the scene without you having to explain anything.

3. Break it Down Into Slides

The best practice of making videos, especially for marketing purposes, is to trim it down as short as possible. Our mini-research told us that the most effective duration for an explainer video is between 1 – 2 minutes. Any longer than that, your viewer retention rate will start dropping off.

In order to do that, once you have a bunch of sketches arranged in a way that makes sense, try taking another look at them and see if you can re-sequence them to be better.

Once you’re done with that, try to discard as many scenes as possible without removing valuable information from slides.

To help you save time, you can just use stick figures – then when everything feels in place and coherent replace them with actual characters and objects.

Pro tip: Mark your scenes with number in order to not get them mixed up or misplaced during the production stage.

The next step is defining your visual style. Are you going for cartoony look or a more realistic ambiance?

Your choice here might affect the way you tell your story entirely. For example, with cartoon style, you can practically tell your story in any way you want. Imagination’s the limit – since cartoons don’t have to make sense.

Once you’ve decided on the visual style, you can start designing your character accordingly. It’s obvious that in order to tell a story, you need a character that fits in well in it.

One way to do this is to ask the basic questions a scriptwriter always asks, such as:

Create a list of graphics containing characters, objects, and background that you’re going to use in your video. These graphics are naturally just sketches since you’re still in the storyboarding stage.

Adjust the number of graphics you create according to the number of characters and scenes that you plan on adding to your video. Having decided your visual style in the previous step, you should already have a clear image in your head about how each character and object will look like.

Once you’ve decided on your style and prepared a graphics or shot list to use in your video, now it’s time to create a sketch for your video. Sketching out all of your story can help you feel the flow of the video.

The graphics that you prepared in the previous step should help you sketch much faster, especially with digital storyboard since you can just copy and paste the graphics into the storyboard.

The icing on the cake for your storyboard is descriptions and footnotes to guide the creative team such as animators, graphic designers, and voice actors. These notes are especially important when you work with a large team consisting of different personalities.

Pro tip: During pre-production and mid-production stage, be sure to clearly communicate with your team if they have any feedback or questions regarding the video. They are the ones working first-hand with the production process – they know the best practices.

Related: 7 Steps to Creating a Storyboard for Explainer Videos

All in all, storyboards help a lot with your video production process. It doesn’t matter whether it’s an animated video or a live-action movie – even hollywood directors still use storyboards to pitch their stories to studios.

However, not everyone has the time to sketch their ideas into a visual storyboard. That’s where we could help you.

Here at Breadnbeyond, we are a team of creative and experienced visual creators. Not only can we help you drawing your storyboard, we could bring it to life in the form of animated explainer videos.

Looking for a way to create a stunning storyboard for your next campaign? Breanbeyond to the rescue! Click on the banner below to see the packages that we offer: